The Story of Yay (or why I’ve stuck with Flickr) 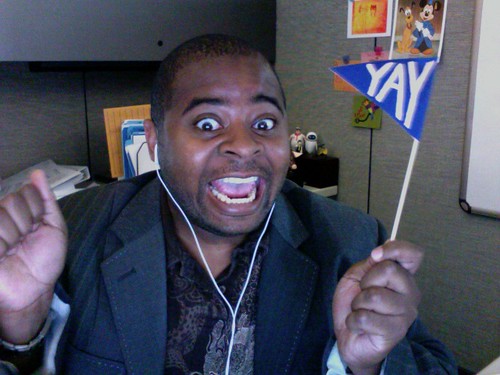 One of the things that I’m most proud of from the last 5 years is that, for a time, I was the #3 result for the word “yay” in google image search. I’m down around #8 now but it’s still my own little piece of recent internet ephemeral fame. The story of that picture is one thing but the story of how it became so highly ranked is pretty straightforward. Flickr makes images easy to find. Someone that I don’t know was looking for a “yay” picture to go with an article and found it (either through flickr or their own googling) and…magic.

They had every right to use my photo. I use a Creative Commons license on Flickr that allows for non-commercial usage with attribution. I suppose I could quibble if the site is ad supported but I was able to make these decisions about my pictures. I can make it on an individual basis. I can share my photos as widely as I choose. Be that one other person or the world. I pay for the privilege. I’ve done so for many years now.

The conversation around Instagram and their Privacy Policy/Terms of Use changes the past few days ties nicely in with Anil Dash’s post from last week about the web we lost. I remember when the Flickr community participated actively in helping to form and re-form the policies around the service that still persist today. I remember the many heady conversations and points of view and how it felt, even if it wasn’t necessarily the case, that the whole community was engaged and invested in the outcome. That the instagram community has reacted similarly seems like a throwback to that time.

That may just be what’s in my field of vision, though. Unlike on Flickr, I struggle to make sense of the broader community on Instagram (probably because there isn’t a meaningful web experience) so who knows if the masses actually care. It was a reminder, though, that Flickr does care.

And pretty much all of the moments of the last decade that I care about that were lucky enough to be captured in an image (still or moving) are on that old photo service.

And the Yay Flag Opening Ceremony.

See you around the old neighborhood.